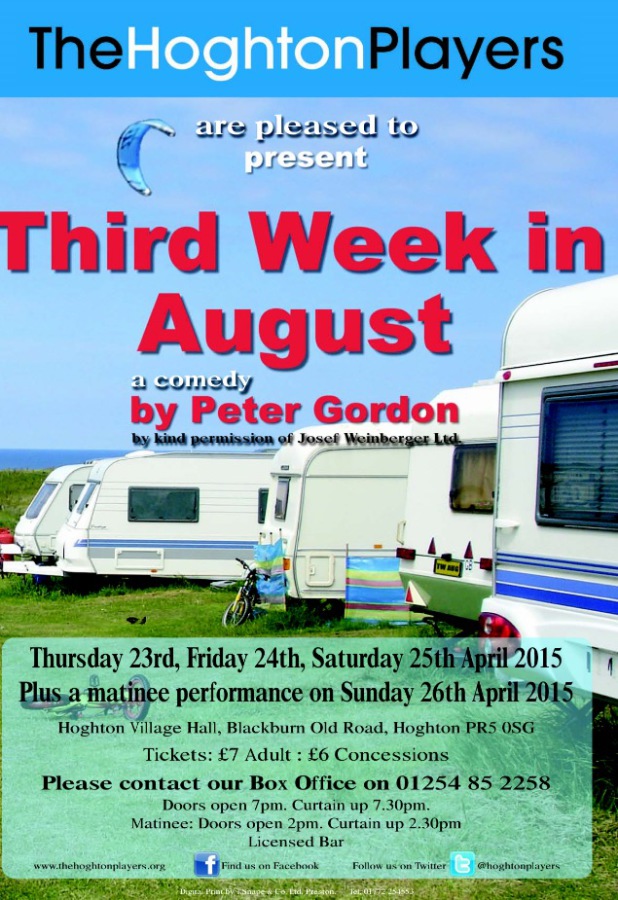 "Excellent acting from everyone, preferred it on stage"

"Only one point to make! The audience should have been applauding the set! Fantastic - so believable. Thoroughly convincing acting and expression and the excellent use of the pause! Congratulations!"

The play, Third week in August, was acted by The Hoghton Players in April with four new members and with the Director, Ruth Jones, standing in at the last minute to play Mary, because our own actor, Carol McCann wasn't well enough.  No one would have known that Ruth was not intended for the part in the first place. The play was a great script by Peter Gordon, and was acted superbly by each of the characters.

On the stage for the first time for a year, the set was made into a caravan site and the set designers are to be recommended for this, with a new backdrop and even a caravan and an awning, along with the stage paraphernalia of a barbecue and a kite as well as various camping tables and chairs.

Several people came together for their annual holiday on the coast somewhere in England, Sue (Lyndsey Wilson), a writer wanted to be alone to write her play, and the couple Neville (Peter Howarth) and Mary (Ruth Jones) who came for their 27th, or was it their 28th, holiday here, Neville being always willing to offer advice to first timers, getting carried away with the rules of the site. Neville played with great timing for the funny lines he had and the rest of the cast did just as well. The story spent a lot of time telling us about Mary's sister Liz, (Donna Keller) who they had brought with them. She was divorced and Mary kept on insisting on telling the other site members about the intimate details of her life until eventually, being unable to tolerate any more, Liz took herself off.  Did she go to try to commit suicide or merely a walk to get away from the others?  We were held worrying along with Mary, until Tony (James McAlpine) came back and spent a lot of time with her, much to the annoyance of his girlfriend Jenny (Jennifer Miller).  All worked out fine in the end with Mary and Neville booking the site for their holiday next year…

Congratulations to all the cast and crew on another succesful show. All proceeds from the raffle were donated to The Baby Beat Appeal.