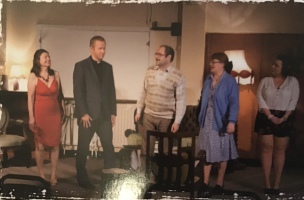 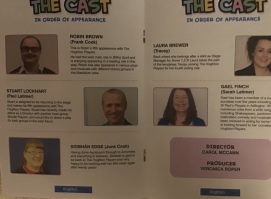 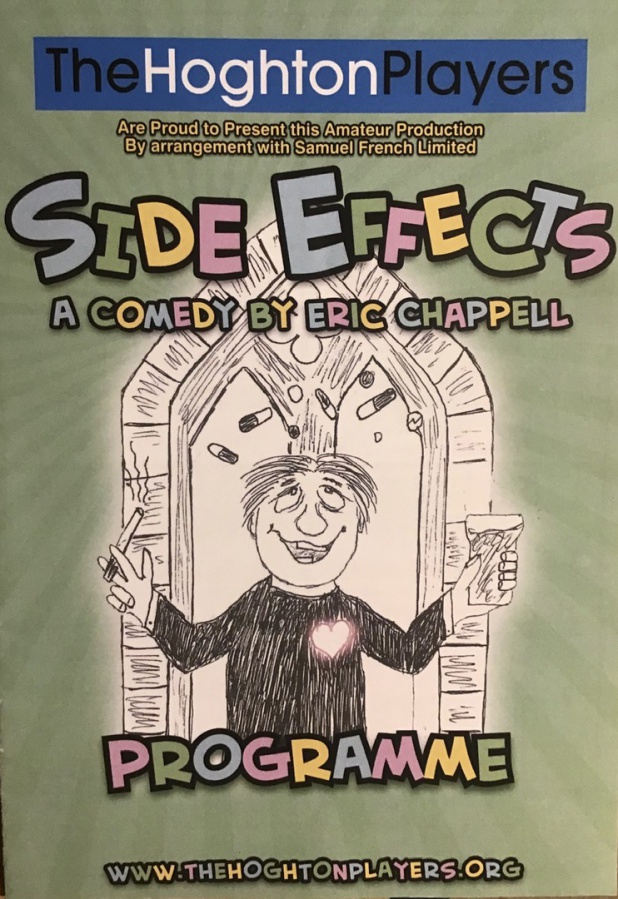 “Absolutely brilliant – loved the round format”

“Just the best ever, well done & thanks to all concerned”

This was a wildly funny play set in delightful surroundings with a totally professional performance by a talented cast whose comic timing was spot on.

Robin Brown made a superbly curmudgeonly Frank Cook, stuck in a respite home with a mystery illness, unable to walk and wallowing in self-pity, whilst Siobhan Edge was the perfect foil as his wife, June. Her Les Dawson impression (from his Norman Evans 'Over the Garden Wall' sketches) was worth the price of admission alone.

Stuart Lockhart was excellent as Paul, the vicar, who is resting in the home after a heart transplant. Not only does he have to put up with Frank's scathing comments about his religion but also he is being stalked by the voluptuous Tracey (played by the voluptuous Laura Brewer) who believes his new heart once belonged to her late lamented boyfriend, Melvin, recently killed on the fairground Wall of Death.

When Tracey turns on her charms, Paul's hands start to sweat and pulsate and, dog collar discarded, he follows her into the garden with the inevitable outcome.

Is Paul turning into Melvin or is his behaviour the side effects of his drugs?

Paul's wife Sarah (a standout performance by Gael Finch) tries to win him back by changing into a seductive cocktail dress and emulating Tracey, not easy for a typical vicar's wife.

But Sarah need not worry. Tracey rushes off to Tunbridge Wells where she discovers the real recipient of Melvin's donated organ lives. Beating stoically inside Paul is the heart of a recently deceased female vicar.

The dialogue was irreverent, fast and snappy, as might be expected from the author of TV's 'Rising Damp'

Everything came together so well on the night. Set as a Theatre in the Round inside the huge dining hall of Samlesbury Hall, with mulled wine and mince pies served in the interval, this was a perfect piece of theatre.

Side Effects Review by Rebecca Cohen.

As an amateur dramatics society, the side effects of taking a risk can be a huge gamble, but in the latest Hoghton Players production, it was made clear exactly why changes need to be made.

In all their previous productions, the group have stuck to the typical proscenium layout - with actors on the stage and the audience out in front.

This time, for their adaptation of Eric Chappell's "Side Effects", the executive decision was made to stage the comedy in the round.

It was a controversial choice, and one I know caused fears among the cast and crew, but it was one that ultimately paid off.

This was a play centred around Frank Cook ( Robin Brown) and his experiences during a week in respite at a nursing home. While there, he encounters Reverend Paul Latimer (Stuart Lockhart), who is recovering from a heart transplant. With his own wife June Cook (Siobhan Edge) and the reverend's wife Sarah Latimer (Gael Finch) becoming increasingly concerned over Paul's behaviour, a hilarious comedy ensues.

The question is, is his behaviour a side effect of the medication, or is it due to temptress Tracey (Laura Brewer) coming on the scene - convinced that Paul has her deceased partner's heart.

All in all, this production was performed well, with actors working together to deliver excellent comic timing and some fabulous characterisation. In particular Edge's portrayal of 'do-gooder' June was extremely captivating, leaving the audiences in stitches.

But above all, praise must go to director Carol McCann and producer Veronica Roper for not 'sticking to the norm' - I truly hope it inspires others to take more chances in the future.
A wonderfully entertaining show that you must catch at Samlesbury Hall, where it will be staged on 13, 14 and 17 November 2013.