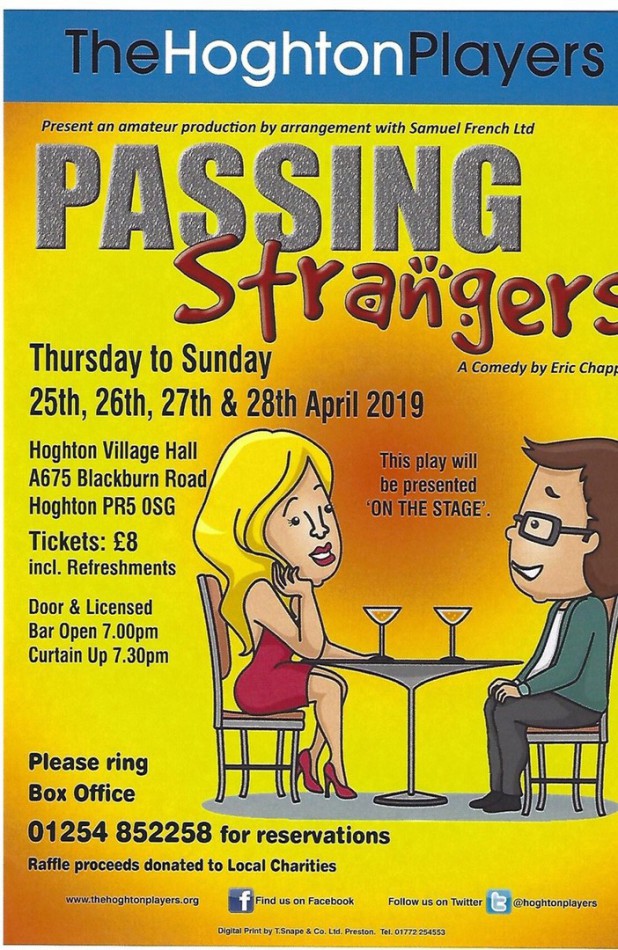 ”Excellent - Well done all on a brilliant and very enjoyable production”

NODA review of our recent performance

Eric Chappell always delivers intriguing situations. The plot of "Passing Strangers"  being no exception.  We are introduced, two at a time, to four characters in search of new partners.  The place is a club at Christmas time promoting a singles night. Each of the four has different reasons for being there. As this is Eric Chappell we know things are not going to run smoothly and that there will be plenty of laughs along the way.

Clive is a hospital porter. He is mistakenly taken for a doctor however... much to the delight of Julie! Meanwhile, Clive is trying to sweet talk Liz into believing that he knew her when they were youngsters. Will they get together and leave the club as tow couples setting out on new adventures?

As the programme reminded us memory is a fickle thing. The programme also tells us that there are only four characters so we do not expect some former husband or wife or partner to turn up to add even more spice to the already rich confection of lies, misunderstandings and revelations. That sense of the anticipation often present in many of Chappell's plays is denied us here. Most of the first scene is spent establishing the background to the characters, their marital history and other details, serving to portray them as real people in whose lives we can take an interest in should we so wish. Talking of the programme, it was very well laid out, but I could not find the NODA logo, perhaps my eyes (?).

Director, Carol McCann , no 'passing stranger' to Eric Chappell's canon, had decided to use the stage rather than the more usual "in the round" setting that Hoghton Players have established an enviable reputation for in recent years.  This had the effect of emphasizing the men's table and the ladies table One stage left and the other, unsurprisingly, stage right.,thereby making it clear where the two territories were encamped. The characters (male and female) had to be invited into the opposing entrenchments. Malcolm frequently hovered at the back of a chair in the ladies area before daring to sit down for example.  This was a skillful direction. The fact that there was little in the way of a set apart from two tables with chairs also helped the feeling that this was their space and at no time was anyone else going to intrude. Likewise, the narrowness of the set, front to back, allowed little opportunity for characters to move upstage and downstage, the action being mainly left and right and back again. This was a smart decision as it meant the characters were always at the forefront of the audience's attention. Centre stage became no man's land where the character's tactics and rules of engagement were played out before retiring to their preferred comfort zones, SL. or SR..  This would not have been so successful had it been played in the round.

Since we were in a night club we expected music. And yes, of course, we could hear it spilling out from the cabaret room beyond the side curtains. it was quite a neat idea to have it playing throughout the play. Yet, and perhaps it was because I was sitting underneath a speaker ("of course it was, Paul"), I did find the continuous bass line pulsating out continually a trifle distracting.

Frank Duxbury gave us a pleasing performance. He managed to create a man in, for him, and unusual situation, relying on his friend Malcolm to point him in the right direction and to give him the lead and motivation.  He was appropriately dressed for the part. His tie, straight from the Donald Trump school of haute couture, was of particular note.  Chris Hill as Malcolm was the jack the lad of the two companions. As played he emerged as the more complex character. His final comeuppance when he realised that all his efforts to bamboozle Liz had been anticipated by Liz was deftly played.  As I have remarked in other reviews, Eric Chappell always offers his audiences that little bit of extra. if they want to accept that there really is something lying deeper beneath the thin patina of comedy then it is there for the taking.  Both Frank and Chris, no doubt coached admirable by the director, conveyed this convincingly.  The comedy, in addition to the given ridiculous nature of the situation, (when it comes), comes strongly.  The play is littered with hilarious one-liners. All four actors savoured these jewels delivering them with fierce attack. Again I detected the directors, both Carol and assistant Ruth Jones, firm hands at play here.

Anne-Marie Flood is a favourite with audiences. She is a most capable actor able to bring a touch of grace and elegance to even the most unsympathetic roles. Here interpretation of the frustrated second hand rose that is Julie was first class.  Perhaps the strongest character of the four, Anne-Maire convinced us that Julie was far more than one dimensional.

Gael Finch too impressed offering us a lively, dare I say it well balanced Liz.  She gave the impression that she immensely enjoyed being on stage. This approach is warmed to by audiences. When Liz cried we cried, when Liz laughed we laughed. It was a performance that drew us close to her character and her attendant hangups.

Everyone involved in the production is to be congratulated. The backstage and front of house personnel all their parts to the full.  This is a club that clearly cares about the standard of its productions and for the welfare of its audiences. A prime example being Ian Murray's introductions and management of the raffle. Ian's performances, for such they are, are surely worth the price of a ticket alone!

And of course thanks too to Steph... the complementary rock cake was divine, dear!