Feedback for My Cousin Rachel 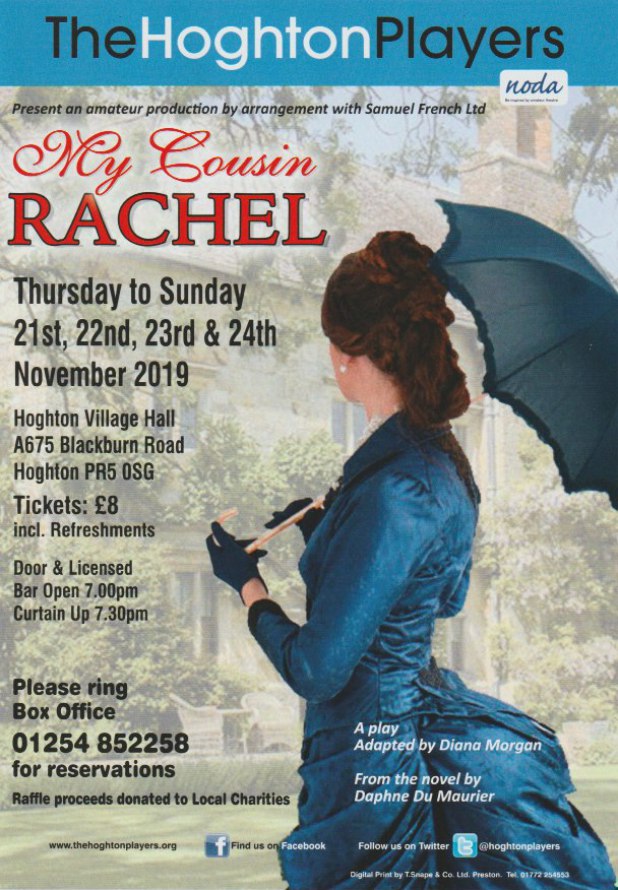 There are no entries yet.

Hoghton Player’s production of “My Cousin Rachel” adapted from Daphne du Maurier by Diana Morgan was very enjoyable. Written in 1953 perhaps the play is a little wordy for today's audiences, but cleverly composed none the less.

I always get a thrill from watching a good meaty tale well told. We were presented with such an entity. Right from the start we were drawn into the story, yet constantly having to update our reactions to what we were being told.

Rachel has returned from Italy to stay with her cousin Philip. He becomes infatuated and then hopelessly in love with her, so much so that he eventually transfers all his recently inherited wealth to her. But, we are asked to consider, did Rachel, in fact, set out deliberately to beguile Philip into such a course of action? And thereby hangs the tale.

The trick to making a success of this play is to ensure that at no point in its telling do we have any indication that we must not take Rachel at anything other than face value. We are encouraged to believe in her integrity and to pity poor Philip who has, as far as we can ascertain, has been cruelly duped. That in itself is a paradox.

As in many recent productions, Hoghton Players performed in the round. I must admit I find this much to my taste. We are never far from the action. Our eyes are always drawn to the actors wherever they happen to be on stage. The use of the space was immaculate. The actors moved about it with considerable skill. This was due to excellent direction by the award-winning duo of Millie Santus and Brian Hoyle. They marshalled their players with due precision making sure the patterns on stage were always in tune with what was being said. Their direction also encouraged fluid ease of movement by the actors.

Uncluttered by unnecessary furniture the set was just enough to evoke the impression of good living in a well to do household. However, there is one drawback to playing in the round in a venue not equipped for regular stage events. I am referring to the use of lighting to create a mood. There were times when I felt a gloomy atmosphere was needed to underpin the action. Maybe getting gloomier as the play progressed. This would have added to the sense of confusion and high emotion.

The play begins with the entrance of the two faithful retainers. Seecombe (Stuart Lockhart) was the epitome of the long-serving ever dutiful lackey. If he said, “very good, sir”, once he said it a hundred times, whether he meant it or not! It was good to see Stuart returning to the stage after a brief absence. His portrayal of Seecombe was very well done. He is an actor in whom one can appreciate his sincerity. I smiled every time he made an entrance. He was well supported by his younger comrade in arms, James (Zak Robinson).

Alex Holt played Nicholas Kendall straight down the line. His character in many respects represents the possible views of the audience as we are torn between thinking Rachel is a breath of fresh air or else a rotter. As a result, Philip becomes more of a cypher than a real character. These kinds of parts are the most difficult to convince. In Alex’s hands all was well however. As an aside, I very much appreciated his changes of tie or waistcoat. This added to the sense of time passing and was a smart move by Millie Santus and Olivia Dixon. Little things really do mean a lot.

Louise Kendall, Nicholas’s daughter, was in the capable hands of Aimee Wright. Honest, caring and hard done by were the features of Aimee’s characterisation. She moved with ease about the space and created a most sympathetic character who the audience was able to warm to.  Philip Ashley, a young man inexperienced in the ways of the world was, in the hands of Jordan Leigh, a tortured soul. We are asked by the author/s either to dismiss him as a young fool, unable to control his emotions, or as a put up on victim utterly and consciously bamboozled by his cousin. It is a difficult ask for any actor to portray both characteristics at the same time. Jordan stepped up to the challenge very well. His final scene was particularly moving.

Rachel was played successfully by Rana Shihadah. The trick to her character is to convince those watching that she is all that she says she is, no more no less. We must never get even the tiniest inkling that she is purposefully tricking Philip. If we did get that feeling the whole pack of cards would come tumbling down. We must have suspicions nonetheless. Rana played her part with considerable charm and wit. Perhaps the deep psychology at work in both Philp and Rachel’s minds was not fully explored. More of the inner emotions at work in the way they reacted to the ever-changing series of events would have been welcome. The nature of the play in this respect places a massive burden on the actors.

Antonio Rainaldi, Rachel’s confidante, arrives in the second act. He is portrayed as another enigma. Jeff Moxham immediately impressed. His Rainaldi was a man of the world ready with sage advice yet knowing how to react to Rachel’s whims. It was a performance by someone who is completely at home on the stage.

I thoroughly enjoyed this play. To be engrossed for two hours in a story as intriguing as “My Cousin Rachel” is a rare treat.

Thank you, everyone, for your ever-friendly welcome and hospitality.