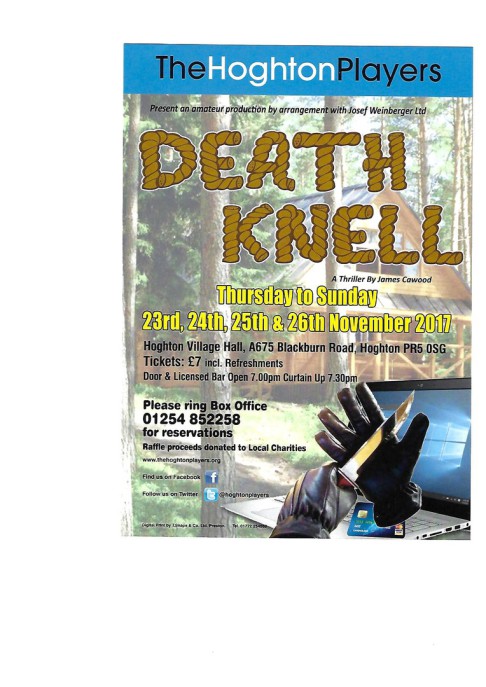 This deliciously old fashioned thriller from the pen of James Cawood provided a large Sunday night audience with excellent entertainment at Hoghton Village Hall. Four performers at the top of their game brought this dark drama to life in a suitably mysterious fashion, leading us through the twists and turns of the plot in style. The Hoghton Players’ winning way with productions in the round was particularly well suited to this drama, as the audience was drawn in to the intimate setting and the tangible air of menace really hit home.

Embittered crime writer Henry Roth was expertly played by Robin Brown in a powerhouse performance which really impressed. Holed up in his Scottish retreat, Henry has a scheme in mind which involves inviting up and coming young actor Jack Willoughby (James Lilley) for an ‘audition’ for his new play. Add a mysteriously uneven relationship with wife Evelyn (Jacqueline Green) and a ‘not quite all he seems’ Chief Inspector (Alex Holt) on the hunt for a local serial killer and you have the perfect recipe for a chilling evening of nefarious scheming, bluff, double bluff and a bloodcurdling bevy of surprising twists.

It’s always tricky with a show report on a play such as this to keep the plot specifics to a minimum so as not to spoil things for a potential audience. Those of us who are fans of the twists and turns of a good old fashioned murder mystery like to indulge our armchair detective side, so there will be no revelations here: suffice to say, anybody keen to enjoy the surprises in store with this play will not be disappointed. That being the case dear reader, accept my apologies for what must perforce be a shorter than usual show report!

Robin Brown kept us on the edge of our seats all night with a beautifully well pitched performance as the crime writer with a devious plan. This was a very powerful characterisation and gave the production a solid centre. Jaqueline Green impressed as Mrs Roth, a mysterious lady with a troubled past, successfully navigating all the necessary psychological twists which threaded through the tale. James Lilley was equally strong as Jack Willoughby, the young actor who hopes to make his big break with a starring role in the new play. I’ve seen James on stage a number of times and wouldn’t fail to name this as his strongest performance to date. Stirred into the mixture to liven things up even further, Alex Holt was a realistic and down to earth presence as policeman, Lazan. All four of our talented team of performers made their way around the performance space with real style, never an easy task when a production is in the round. Being cheek by jowl with the audience, having to be aware of sight lines and working complicated stage blocking around considerations of characterisation, advancing the narrative (not to mention learning the lines in such a wordy piece as this) is a skill in itself.

The staging was exquisitely worked out, the arena set out superbly for the devious battle of wits before us,  keeping things pleasantly simple and appropriate to the piece. Almost immersive in its intensity, this was a production which scored on every level. Direction from Brian Hoyle was assured and meticulous and the whole evening was a joy. The ‘shock’ final surprise was perhaps a step too far - and made little sense - but as this is a fault of the play rather than this production, it’s hardly worth mentioning. This Sunday evening performance was a deliciously diabolical way to round off the weekend and I would urge more societies to look into following the lead of the Hoghton Players in this respect.

My thanks go to all at Hoghton for making myself and Stuart so very welcome and I look forward to the next production with keen anticipation.